The sky is the ground

Hello, peeps! They said that inner beauty is great, but a little mascara never hurts!

It’s been 2 weeks since my last review. I didn’t have the time to take and edit pictures since it was the final week of my 4th semester. Exams were coming and it’s been a hell of a week. Summer holiday has just started to arise! Anyway, this is going to be my last makeup review for the next 2 months because I’m going to Europe and couldn’t get more excited! You read that right, 2 months! I will dedicate those journeys to write my very first travel review!

I purchased this mascara complimentarily during the makeup class that were conducted by LANCÔME a few months ago. They invited a makeup guru and she taught a lot of things – about how to apply numerous colours of eyeshadows, brows basic theory, blushes colours and application according to face shapes, and a lot of other things – unlike my experience in the previous post 😡 The funny thing is, ‘guru’ literally means ‘teacher’ in Indonesian. Perhaps that’s where they derived the word from.

LANCÔME is a high-end cosmetic and skin care brand, a subsidiary of L’Oréal Group since 1964. I was quite surprised that the L’Oréal have acquired so many companies, and you can check them here. I never really knew about which product line of the brand that were praised; the only thing I heard about was the mascara, hence the purchase. Anyway, let’s get down to the review. 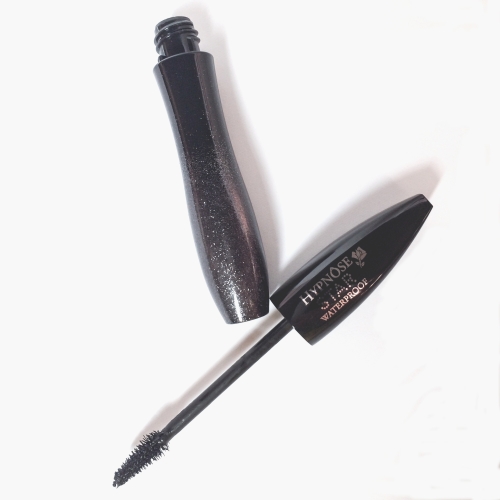 Product description as quoted from the Lancôme official website in UK:

Product application as quoted from the same resource:

Start the mascara application by gently pressing the flat part of the brush onto the roots of the upper lashes, to release some product and define the eyes. Then turn the brush to use the side with longer bristles and then glide it from the roots to the tips in a zigzag movement to ensure the texture is spread evenly. Use as much mascara as is needed to thicken and taper the lashes.

Ingredients as quoted from the box:

As the picture said, my mascara’s brush is in the cone taper shaped. It is supposed to give a winged outer look, but let’s see how it goes. This is actually the first time I opened the mascara so I’ll just write my first impression review.

The mascara is very easy to apply! It doesn’t smear onto my eyelids when being applied unlike my previous mascara Maybelline The Hypercurl Volum’ Express, and it dries pretty quickly. Much to my content, the fluidity is on the appropriate thickness; not too dense and not too dilute. The volumising feature itself is not as thick as I wanted it to be. Clotting was fine, at least it’s less than the Maybelline’s and the L’Oréal’s Voluminous Butterfly Mascara. As I refused to believe, the brush doesn’t give any of the ‘outer wing’ effect, but that’s not much of a deal anyway.

However it doesn’t curl my Asian stiff lashes that much and doesn’t hold the curl that long either. (I don’t know what’s wrong with my eyelashes though 😦 I’ve been using the Shu Uemura Eyelash Curler for a while and my lashes won’t hold its curl as long as the first time I tried this curler. Changed the rubber, and still, my uncompromising lashes wouldn’t curl to the extend of the beauty of the curliness). I used it all night long and the mascara itself is still fine. The only thing I haven’t tried is whether the mascara fibres would fall down to my contact lenses or not. I’ll update the article once I use the contact lenses alongside with the mascara. A plus point will definitely be given if it doesn’t hurt my eyes.

Disclaimer: This article is not sponsored by the product’s company. Any writings are solely based on my honest opinion. I do not hold responsibility for those who have different opinions about this product. All of the photos were taken by me using iPhone 5s except for the one mentioned in the caption.

My passions. My experiences. My opinions.
grace.then@hotmail.com

There was an error retrieving images from Instagram. An attempt will be remade in a few minutes.

There was an error retrieving images from Instagram. An attempt will be remade in a few minutes.